Earlier this year, I met Alan Gibson, the man who records gull rings, in Hyde Park. He told me that he had been to one of your lectures on Little Owls, and that sighting records were needed. I have been watching the Little Owls in Kensington Gardens and Hyde Park since they arrived. Here is their story.

Little Owls, though originally uncommon in England, were recorded before their reintroduction in the 19th century. Bewick (1798) said in British Birds that the Little Owl 'is rarely met with in England: it is sometimes found in Yorkshire, Flintshire, and in the neighbourhood of London'.

Little Owls were recorded on the all-time sightings list for Hyde Park and Kensington Gardens, which began in 1889, but this is a bare list and gives no details. You can see this entry in Andrew Self's The Birds of London, so there's no need to go into further detail. There has been at least one pair of Little Owls in Regent's Park near the children's playground in the years around 2010. I never managed to see them, since hanging around children's playgrounds with binoculars exposes one to comment. 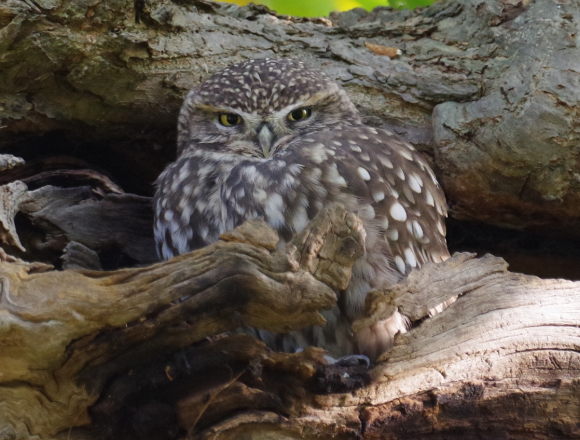 In December 2011, a Little Owl was seen in Hyde Park in an Oak tree just across the road from the boat hire place. This was the first sighting for an unknown number of years. It was a single sighting, and nothing else was seen here for some time. At the end of March 2012, three pairs of Little Owls had arrived in Kensington Gardens. At first, they were unsettled, and were seen in various places. By the beginning of April that year, one pair had established a territory in Kensington Gardens in an old broken Sweet Chestnut tree, south of the leaf yard (the railed-off enclosure where dead leaves are dumped, surrounded by shrubbery, and with the statue of Peter Pan on its east side). On the 6th April 2012, I started my blog on Kensington Gardens and Hyde Park birds, and the first photograph on it was of the male of this pair. He's still around, and my most recent picture was yesterday.

Presently, I know of five pairs of Little Owls in the park. There is the pair near the leaf yard, another pair which nests in an Oak tree north of the Albert Memorial; and another in a tall Lime tree on the hill above the Henry Moore sculpture. This year, all three pairs bred and raised two owlets each, all of which I have seen and photographed and published the pictures. 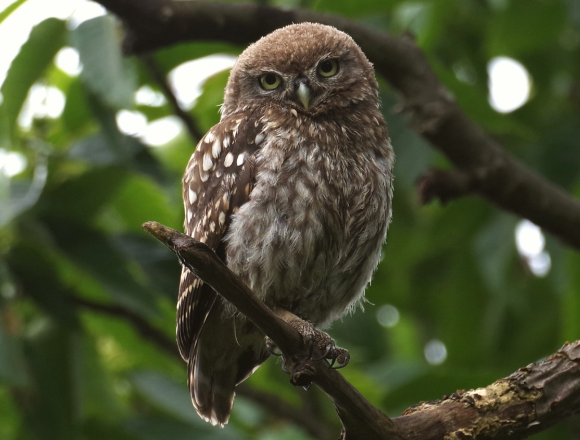 Additionally, there is a pair that is only seen occasionally on the north side of the Round Pond; and another pair that was seen twice in September this year in Hyde Park near Bluebird Boats, which is the same place that a single owl was seen in 2011. I think they are based in the garden of the Ranger's Lodge. In 2015, Police Constable Stephen Barnes - the park's Wildlife Crime Officer - told me that one evening, he was driving up the Broad Walk between Kensington Palace and the Round Pond at dusk, and his headlights lit up a 'whole lot' of Little Owls running around on the grass. I think it would be safe to say that the total Little Owl population of the park is 20 or more. This has been a quick and successful colonisation.