Steve Rogala-Kaluski of Untamed Images kindly emailed the UK Little Owl Project about his local Little Owls. Steve has generously shared his encounters in this guest blog, along with a selection of his Little Owl images to inspire you to seek out your local Little Owls and report your sightings here. Thank you Steve.

I've been working with Little Owls since 2010, although there was a one year break in 2011, as the owls had either moved site, or sadly not did not survive the winter. In 2012, a new pair appeared about a mile away, resident in an old Willow tree that had been hit by lightening, but is still alive.

The surrounding mixed habitat appears to have everything that they need, from an uncut meadow with tall grasses in the summer, ideal for voles and caterpillars, ploughed crop fields with worms and beetles, and access to water. This pair became very successful parents, rearing eight owlets over a three year period.

Sadly, this pair has not been seen in 2015, but two of the owlets from last year have bonded and initial signs suggest that they may have bred.

These two Little Owls have been sharing the tree with a pair of Barn Owls and Jackdaws, who have taken over the specially made Little Owl box which I will need to clean and refurbish this November. 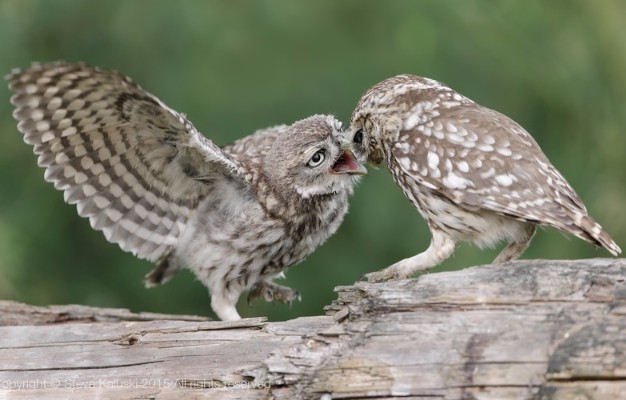 Since late April the new couple have been very visible throughout the day but, in May, the male has been the more prominent one, defending the nest site from a pair of aggressive Kestrels, interspersed with bringing home food. He can often be seen in a hollow of the tree trunk, sheltering from the wind, or in a sunny spot below, and he loves to play hide & seek on the 30ft nearby hay bale stack. Having learnt a lot from Andy Rouse, i.e. showing them due respect, being as quiet as possible, together with shooting with long lenses, they in return have given me a wonderful window into their own world. My patience has been rewarded, although given that most of the time they tend to nod off, I cannot help at times not to follow suit! Below are some of my favourite images. 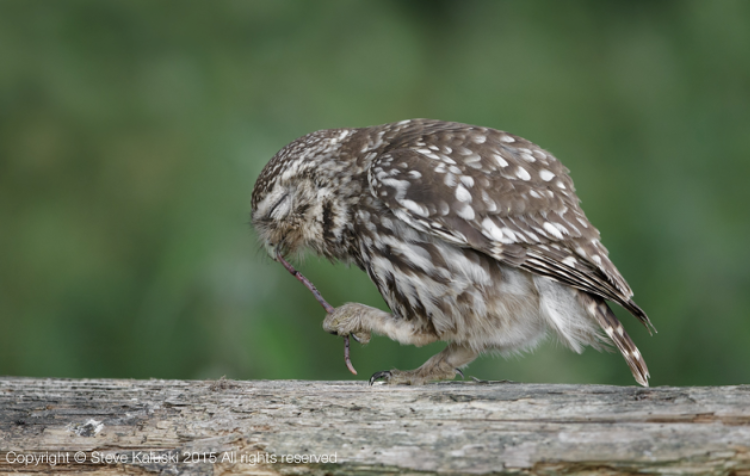