I revisited this site on Wednesday 29th April to check if this female Little Owl had laid a fifth egg. She laid her fourth egg on Sunday 26th April at 20:35 hours. There was still four eggs in the box today; she was sitting tight and incubating them. Since it has been 69 hours since she laid her fourth egg, it is very unlikely that she will lay another egg. The average UK Little Owl clutch size is three or four eggs, so a complete clutch of four eggs is at the upper range of average.

Why does clutch size vary? Clutch size is influenced by a number of factors, such as weather conditions before egg laying, food availability, timing of breeding and local population density. Late winter and early spring weather conditions are really important - if the weather is very wet and cold, there is usually less food available to Little Owls so it will take longer for a female to reach breeding condition. And the opposite is also true. A female needs extra fat reserves to lay eggs and to incubate them. Some years there is less food around due to local habitat conditions and cyclical population variations in small mammals.

Little Owl chicks need lots of food to grow from 10 to 160 grams in 28 days, so the parent owls will time their breeding to maximise the chance that there will be enough food available to feed their young. Food acts as a signal; if more food is available, a female will usually lay more eggs, and she will lay earlier in the season. In the UK, Little Owl clutch size ranges from one to seven eggs. Pairs that breed in clusters usually lay less eggs than isolated Little Owl pairs.

This nest box has been used as a breeding site by Little Owls since 1994, so I thought you might be interested in this graph, which shows the annual clutch size at this site from 1994‒2015. The average clutch size is four eggs.

Timing of breeding is measured as the date that the first egg was laid. First egg date ranges between 28th March and 4th May at this site from 1994‒2015. The average first egg date is the 13th April. We are unsure how many different females and males have bred at this site over the years.

What next in 2015? The female will carry on incubating her eggs for 29 to 31 days from the date that she laid her second egg, which was the 22nd of April. This means that her eggs should start hatching between 21st and 23rd May.

Please check back for more updates on this UK Little Owl breeding attempt. 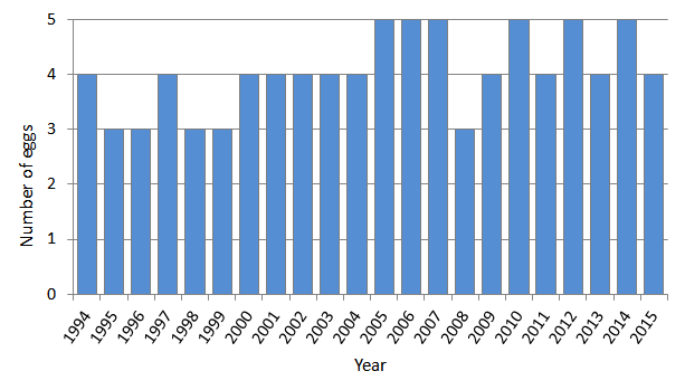